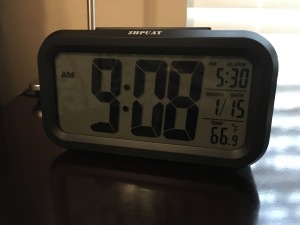 Until very recently I was among the nearly three-quarters of American smartphone owners who sleep with their phone next to their bed. I routinely spent a fair amount of time scrolling just prior to sleep. This, despite recommending to parents at least weekly in clinic that they get their child’s gadgets out of their bedroom if they wanted to increase sleep quality and quantity.

For about a year now (okay, let’s be honest, at least two) I’ve been telling myself I needed to make a change. I wanted more peaceful thoughts running through my head when I closed my eyes each night; instead of the myriad news stories that Facebook put in front of me, or the work email that I just couldn’t shake. I wanted to control my phone instead of it controlling me. I had done pretty well with this in other ways- taking periodic digital sabbaths and gradually decreasing my overall screen time by tracking it.

But taking this final step was elusive. I had an excuse. A rationalization. A road block. The thought that runs through your head when you know you need to make a change, but cannot do it, and so convince yourself that it makes sense to maintain the status quo. In this case? I didn’t have an alarm clock. I really needed my phone to be my alarm clock.

Then my son got a tablet for Christmas. I had pretty mixed feelings about this but it is a fairly simple model that he uses for homework (and of course his “videos”). We set up some screen time rules around its use and one of those rules is that the tablet has a bedtime. It charges in a docking station in the family room. Here I was, telling my son that his tablet had a bedtime but I couldn’t give my phone the same.

So I bought an alarm clock. Ten dollars later and I am free. It’s been almost two months since my phone joined the tablet at its docking station each evening and, wow, I’m never going back. Better sleep. Peace of mind. More reading. Less parental guilt. And no more excuses.